I think I’ll have to explain a little bit about how I became so interested with digital geometry long ago. I self learnt Grasshopper beginning as a informal experimentation with the new tool. I wrote PHP in high school and initially when I am exposed to GH, I felt like the idea of connecting cables from batteries to batteries a bit childish and I would not believe it is a powerful tool that can get even close to scripting. However, I later realize the elegance of separating the functions into “OOP” style batteries could actually allow a lot of combinations to happen. Much more than I expected it would come out. I must praise that the Grasshopper framework had been setup so elegantly that future expandability is so flexible. And the complexity of such combination could reach a very high level in a very short amount of scripting time. 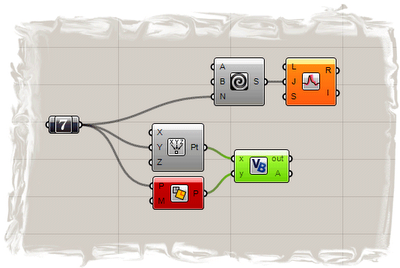 The real excitement for me, who have a scripting background is the ease of debugging the script. The instant visual feedback is perfect to code as you see fit. The ease of manipulating sliders in the same drawing board of the script is much easier when they can be moved to a visually meaningful sequence and groups. These are all previously unavailable. I feel like the coolness of this visual programming answered one of the old question back in my head: Can ‘cool stuff’ like the video manipulation glove in Minority Report be in real be something that is useful (not just cool). One item that arouse my interest a year ago is the interactive music table – ReacTable, it is a very cool move to communicate with the computer by simply manipulating physical objects on a table, and that you get feedback instantly. It is like, when Corbu owns his first car.

Because I have learned GH by experimented with all the batteries, literally try them to see what they do. However, there are not a single non-linear function in the default components. It is only till very recent that I saw the idea of planar-quad mesh (PQ Mesh) and get involved with the mathematics behind them, I realize the power of non-linear optimization being able to solve extremely complex problem by asking the computer to do the dirty calculations.

I will also have to credit the AA Visiting School Beijing that I have attended this winter, which I’m first exposed to generative design. Despite the project in the workshop is not strictly geometry-relating. I learnt about Processing in a few days, and realized how complex a agent based system can be. Further looking at generative approach to model and script self organizing elements and geometric optimization is my area of interest now.

I must say that the relative cheap price of Rhino and many of its plugins are free (such as GH, and its plugins) enabled me to learn by playing with them, deciding what to continue, without much comitment. I also have a desire to share my works to the community as a way to encuorage more academic discussion for the common good of all. As a student I always appreciate architects and practioners who share their projects with me, esspecially those who are willing to release their drawings or even scripts. It seems that the only challenge is to determine the right time to release my work, which balance the dicotomy of making some money and share alike. This decision appears even more troublesome when I’m collaborating with others.